The other day I was at the park pushing Maisley, my littlest Little, in the swing as we both quietly watched the flocks of tiny humans navigating the sandbox. She’s her happiest out in the fresh air with the sun shining and constant energy buzzing all around her. She’s an extroverted adventurer in the making and it’s a beautiful thing to watch. 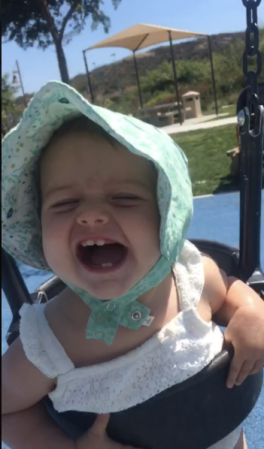 The sandbox was bedlam and I, like usual, found myself feeling extraordinarily thankful that my smiley little person loves to watch the havoc from her safe rubber seat in the swing, waving and clapping along to other peoples’ toddler tantrums and sharing scuffles. We’re not there yet, we’re just observers for now.

Suddenly, the playground fell still as every single kid turned to take in the whispering force that had overtaken the air just above and between them: the bubbles. There were squeals of joy and surprise, dramatic jumps into the air, hats being thrown – widespread bliss, the adults every bit as enchanted as their little ones. These tiny spheres of soap floating invitingly through the air had captivated every soul on that playground.

The bubble curators were two older kids, a brother and sister of probably 10 and 12, who had visited the playground from an adjacent birthday party with no other connection to the sandbox. They were literally attending their private, quiet little gathering and thought to themselves, “who else might enjoy some nice bubbles?” until they spotted a dozen toddlers in a sandbox and scurried the 50 yards over to spread the joy.

Who taught these children to take pleasure in giving such joy to others, to look for a place to bring happiness? How did they know these strange kids would be as enthralled and mesmerized as they were? Were the bubble blowers aware that they were giving every parent on that playground a much needed and well deserved two minute vacation from the world of fetching snacks, diffusing conflicts, and making sure little Johnny doesn’t topple backwards off the monkey bars?

Where did they come from and where do we find more of them?

You know these people, you may even be one these people. I know that many of my readers are indeed bubble blowers; they do especially nice things for others just because. It goes beyond simple kindness and in my opinion these are the people that change the world.

So, from the bottom of my heart, thank you to the bubble blowers of the world. You probably have no idea what your tiny, beautiful acts of love can do – I see you and I appreciate you.

View all posts by Firefly Enlightenment